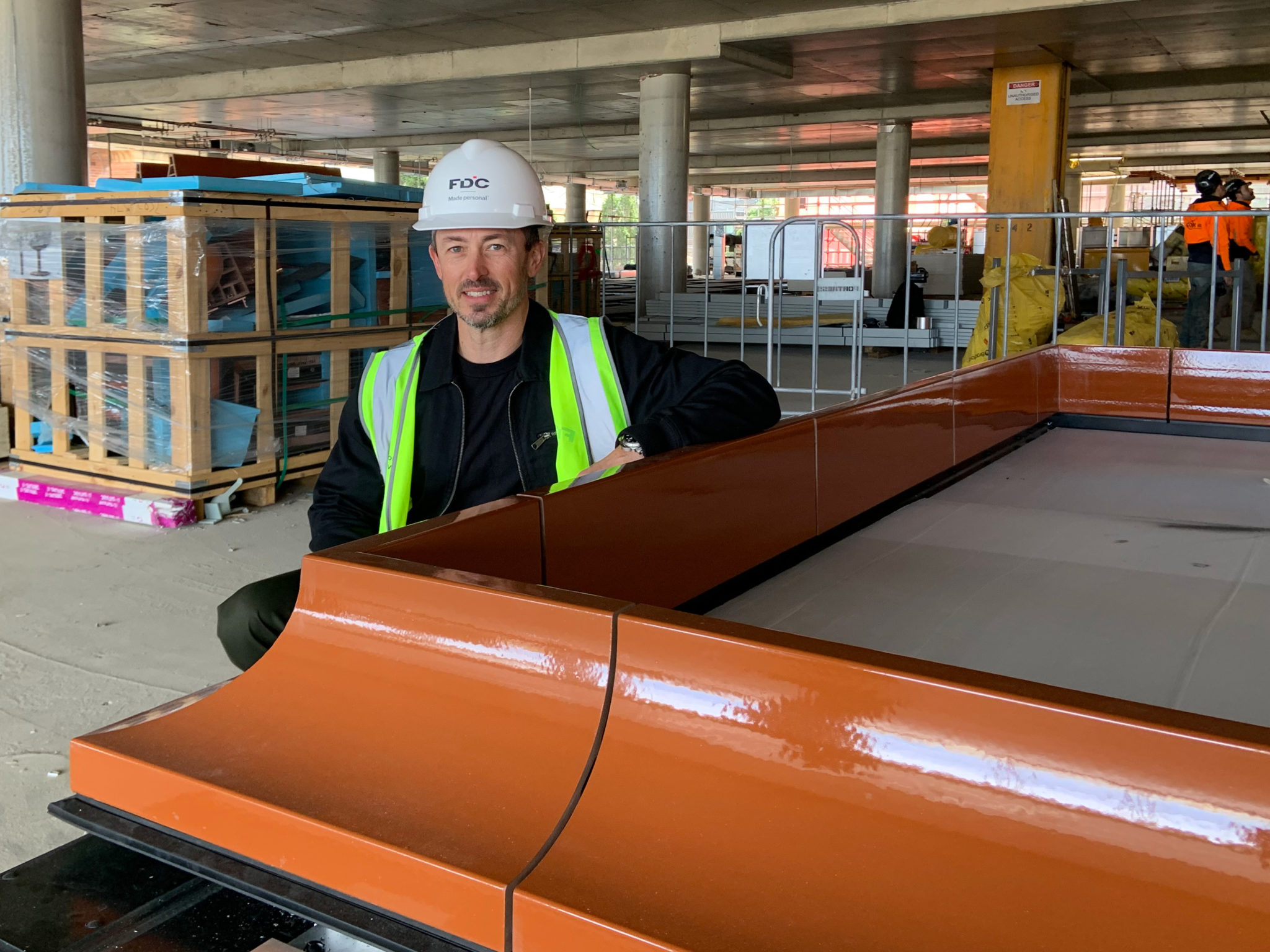 In this edition of Spotlight, Woods Bagot Principal Jason Fraser discusses his inspiration for Blue & William, a 10-storey mid-scale workplace in North Sydney he designed for Lendlease. Jason takes key design cues from the surrounding neighbourhood, including the terracotta roofs of local housing, to give the building unique form and character. Jason has extensive experience in commercial, residential, mixed-use and urban design projects. A diverse background in Real Estate, Fine Arts and Architecture underpins his unique design approach. Learn more about Jason’s design philosophy in the following video and story.

Can you tell me a bit about yourself?

My pathway to architecture is built on a diverse background of interests. I’ve always loved creative activities and have huge respect for people who are creative in numerous ways, especially in fields where people don’t generally expect it.

After travelling and racing motorcycles for a couple of years, I studied Fine Arts. While doing this, I was drawn to art practice that engaged with a greater audience in passive and near subliminal ways like street art and other forms of art practice in public spaces. This interest in public art, and the fact the people who viewed it were central to the experience, not just subject to it, led me to architecture, which I believe impacts people in ways they are often not aware of at all.

I want people to stop and wonder at the buildings we do at Woods Bagot. To sit back and glean a sense of understanding of our intent and the stories that have shaped our outcomes. I want people who pass a design, whether it be once or a hundred times, to one day have that moment of understanding that bonds them to a design and that they never forget.

What other projects are you best known for or most satisfied with?

One of my favourite projects is a drain grate in Pitt Street Mall I designed when working with Tony Caro Architecture. It’s such a simple element that mostly goes unnoticed however every now and then someone will comment on the water like pattern and that it sits over the Tank Stream (Sydney’s first water source). Or understand that it’s only two panels that can rotate and yet still, align, giving it its sense of flow. That sense of story or logic puzzle unlocked is something people love.

As much as the scale has changed in the projects we work on today, I still love these moments and hope to consider every element with the same sense of intent and user fascination.

What was the inspiration for Blue & William?

We understood from the start that it was a unique location on the southern edge of the North Sydney CBD, the point where it meets a highly characterful and established neighbourhood with some houses more than 100 years old. We sought to maximise the development potential and envelope while embedding the highest levels of workplace theory and architectural response to its immediate area. The building’s character is a direct response to the neighbourhood, a place of red bricks and terracotta roofs leading down to the Harbour edge, wrapped around a site specific, future-conscious workplace. 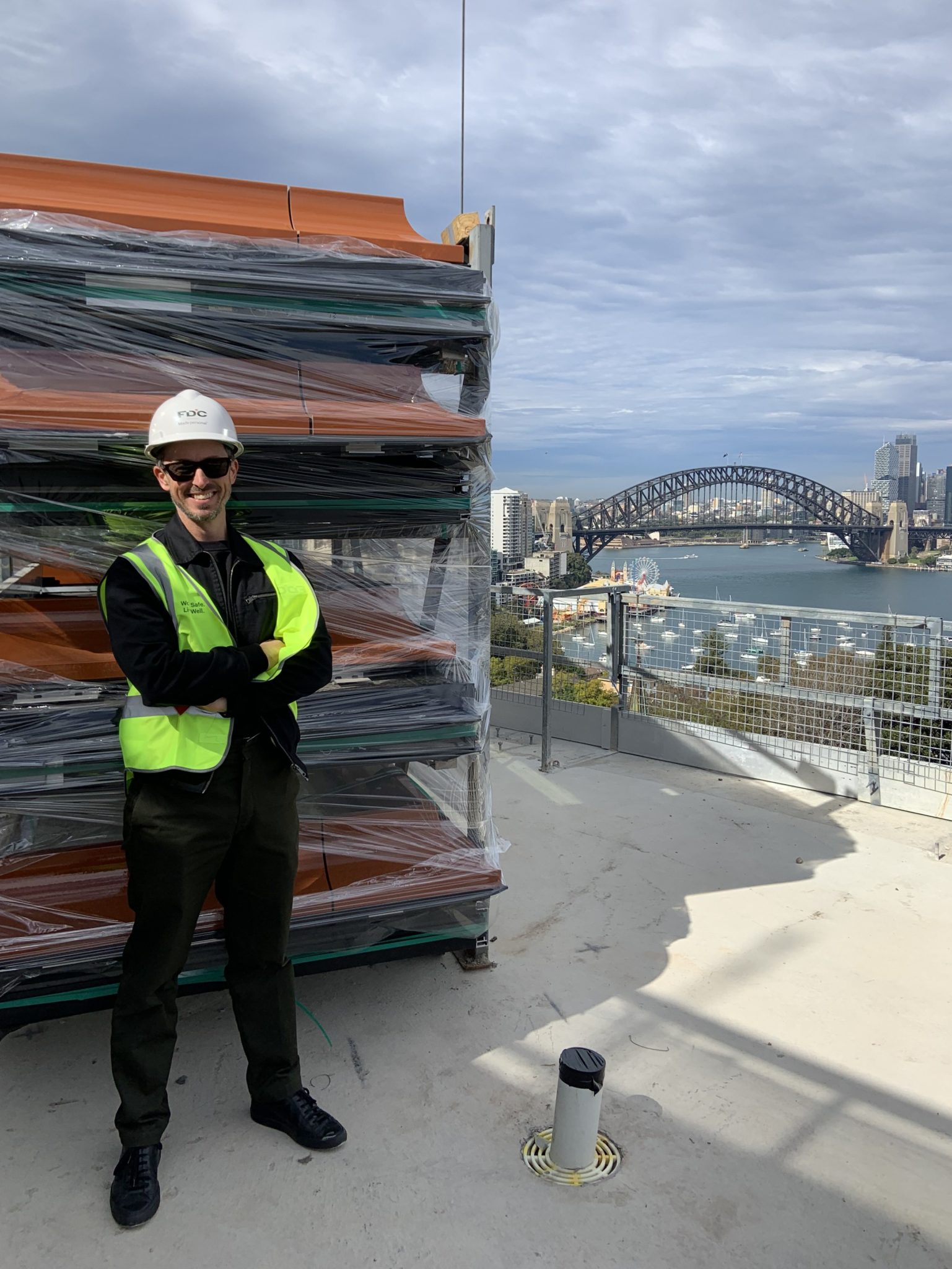 Jason Fraser at the Blue & William site in North Sydney.

“The building’s character is a direct response to the neighbourhood, a place of red bricks and terracotta roofs leading down to the Harbour edge, wrapped around a site specific, future-conscious workplace.” 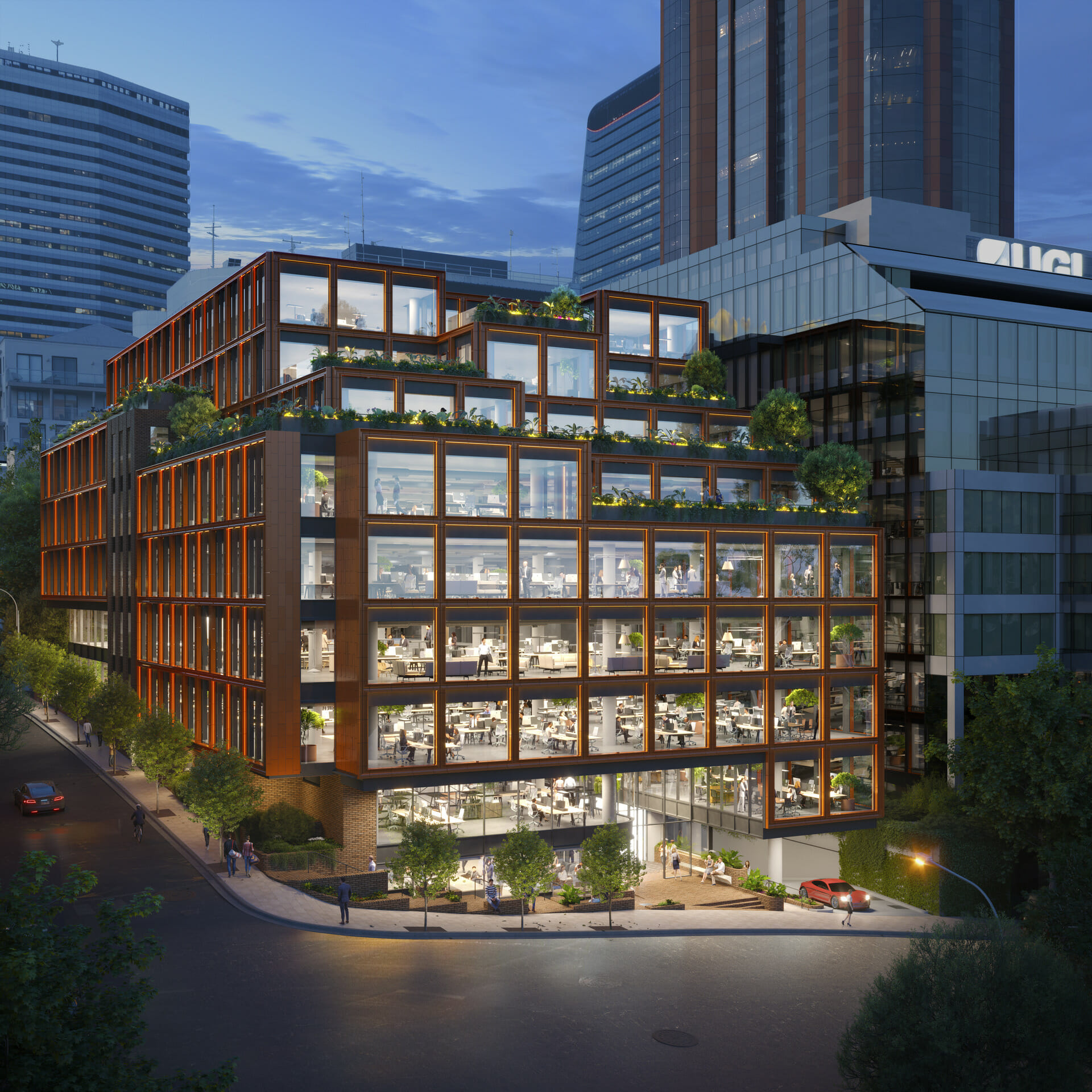 How does the design reflect the site?

The design response has a very direct connection to the site context through its use of terracotta across the façade and red brick connecting the first levels to the ground plane. Both these materials are prevalent in the surrounding neighbourhood. We have also worked with builder FDC to remove and preserve sandstone from the site while we made the entry experience into the building a process of leaving the leafy streets and red brick edges to a movement through a contemporary lobby that draws your attention to the sandstone wall and Wellness Garden at the lobby’s northern end. In addition, we created many and varied outdoor terraces that cascade towards the Harbour, mirroring the natural terrain surrounding our site.

What was the site used for previously and how has this informed the design of the building?

The previous use on site was red brick, mid-century apartment blocks. As with many of these buildings they had an interesting materiality and occasional detail but were of generally low quality. We have collected some of this red brick from these buildings to be integrated into the new building and continue past stories.

What challenges, if any, did the site present?

It’s a steep site on the western side of the Pacific Highway adjacent to Shore School where the terrain falls quickly towards the Harbour. This presented some design and engineering challenges but also incredible opportunities with a 270-degree outlook over Sydney Harbour, west to Parramatta and back to the Bridge, Barangaroo and Sydney’s CBD. We were also constrained by local planning controls and determined not to cause undue impacts to others. However, for us every constraint is an opportunity, and we are very pleased with the outcome.

How does the project respond to the surrounding streetscape and existing area?

Our first approach with every project is to understand the site, its history and what it means to the local community. The site has two primary street conditions which required different approaches. To the south we pulled in the façade at Blue Street to create a more generous public space and sense of arrival. This effectively created a public gesture of giveback to the community that also contributes to improving the workplace. On William Street, the character changes very quickly and we have created a quieter, more landscaped edge that mediates the falls and buffers of the building from the street and neighbours. Materials are very much drawn from the local community, terracotta from the roofs, red brick from the buildings, and sandstone from the earth and local heritage buildings.

What has inspired the form of the building?

The building’s form responds to the sloping site and incredible view, exposure to which we strove to maximise through floor to ceiling windows and cascading terraces that open the building up to the natural environment and enable staff to work outside if they want. A key design element is that the form lifts off the ground plane to connect the public spaces to the heart of the building. There were also commercial considerations to ensure the form combined large contemporary workplace floorplates to meet specific tenant drivers in the North Sydney market while responding to local controls and constraints. We were always conscious of echoing the local terrain, particularly the falling landscaped streets down to Lavender Bay. 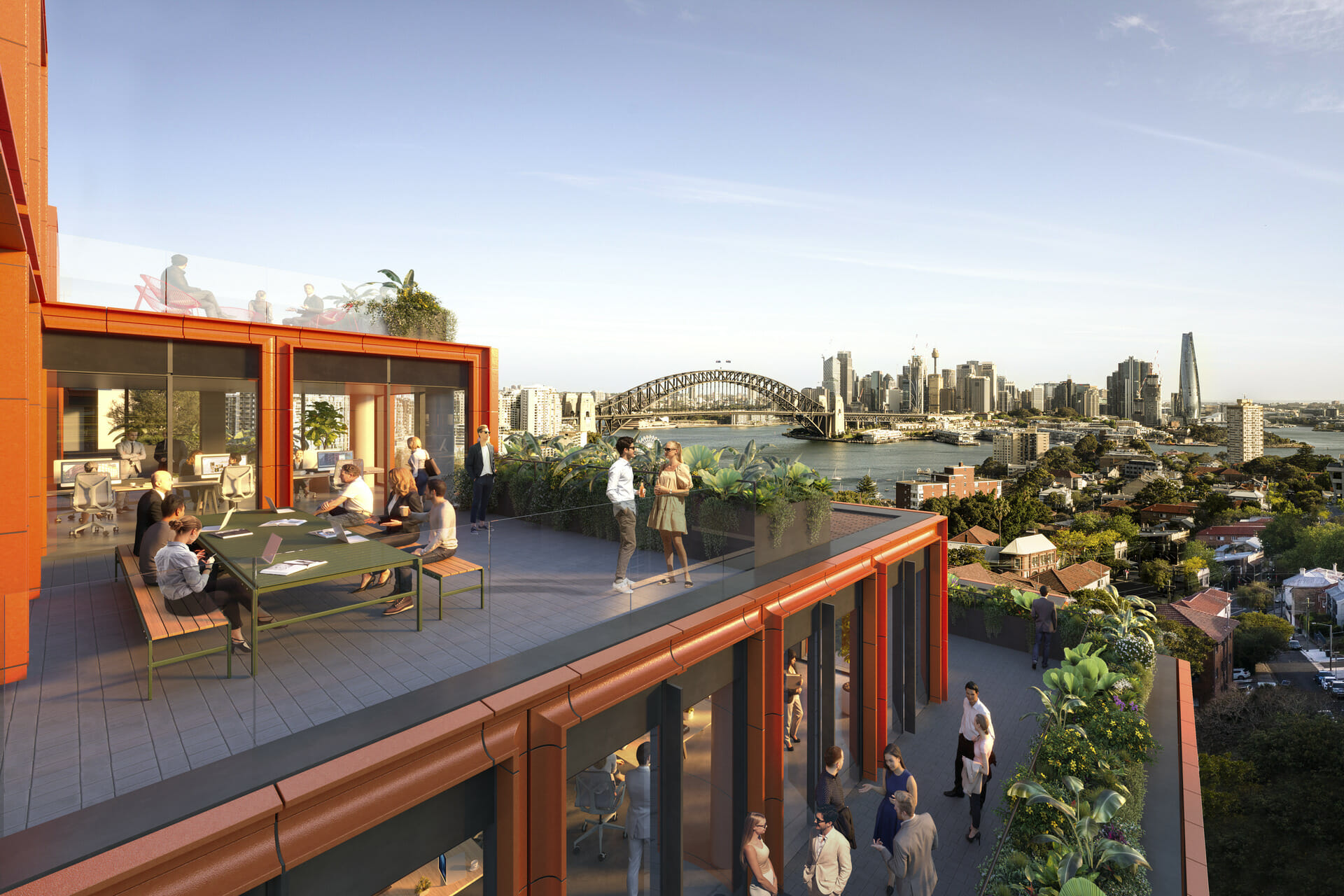 The building features distinctive terracotta window framing on the façade. Can you tell us about this feature?

Terracotta is contextual, natural and celebrates its imperfections. Typically, it’s used in a prosaic way as a standard roofing material on Sydney’s older apartment and housing stock. This made it the perfect material to reinvent through a glossy, glazed finish, form and detail that catches the Sydney light and brought a level of sophistication to the building which, without it, would have been a couple of simple glass boxes.

It is an unusual material for a commercial building and the first one we are aware of in Sydney. Fortunately, we had a great team including Prism Facades that worked to realise our desire to frame the windows in a natural element. It was an 18-month collaborative process to come up the best design and figure how out to make it. Each time we got to see it coming together, such as the Visual Mockup viewing, everyone was so blown away that it kept reinforcing that we had made the right decision. Each window is exceptionally heavy and must be installed by a crane.

What has informed or inspired the landscape architecture?

Incorporating the landscape into all our work is a trademark for Woods Bagot. People benefit from engaging with landscape every day and it’s increasingly important as people become more conscious of their health and well-being. At Blue & William, the landscape is considered in four parts. At the main entrance on Blue Street, we have featured integrated red brick planters, and street trees reminiscent of the site’s past. On William Street we have created a landscape buffer that softens the built edge to the street and improves tenant outlook. A significant feature of the lobby is The Wellness Garden, which is set into the northern edge of the site, revealing the beautiful North Sydney sandstone, and lets in northern light and creates a landscape moment for every building user to engage with. The terraces will also be landscaped, extending the workplace for outdoor work opportunities.

“Materials are very much drawn from the local community, terracotta from the roofs, red brick from the buildings, and sandstone from the earth and local heritage buildings.” 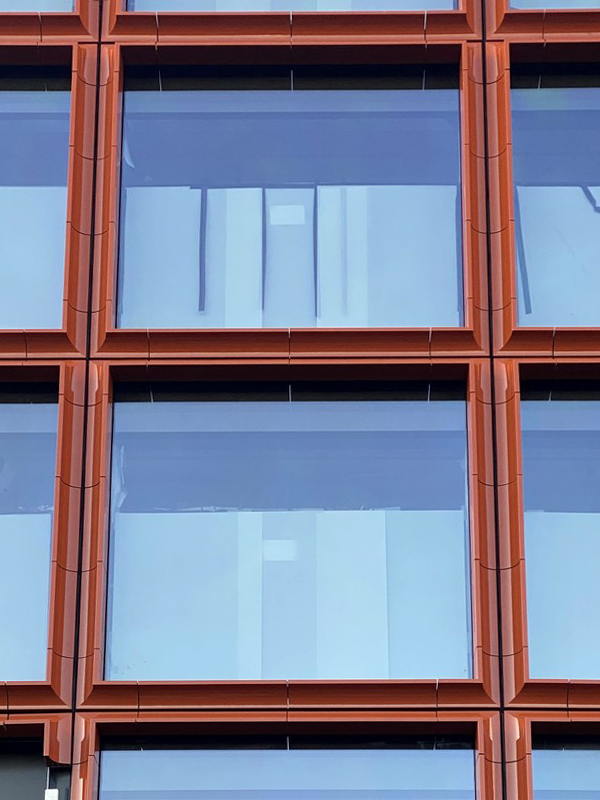 What type of business or workplace has been considered when designing this building?

We knew that a single homogenous workplace environment is no longer the future and barely relevant today. Our response was to create as many diverse and varied environments that respond to the diversity and variety of people themselves. The floorplates are large and vary in size up 1500sqm, allowing to us create different environments. It was also important to elevate wellness through a focus on the building amenity and how we can use landscape.  We always seek to understand the local tenant market when starting these projects by talking to agents and the greater team. We then will overlay this with our own intelligence, constantly developed by people in our team such as Sarah Kay, Amanda Stanaway and ERA-co, about how workplace strategy is changing globally and locally.

What sustainability ratings are you targeting for Blue & William?

Blue & William will be among Sydney’s most sustainably sound commercial buildings. We’re targeting a 5 Green Star Rating and a 5.5 NABERS Energy rating. Beyond this we have tried to really focus on the people elements of the building to elevate a healthy, wellness inducing environment. This is part of our design approach generally but also reflects a greater awareness of Environmental Social and Governance principals in design and development. 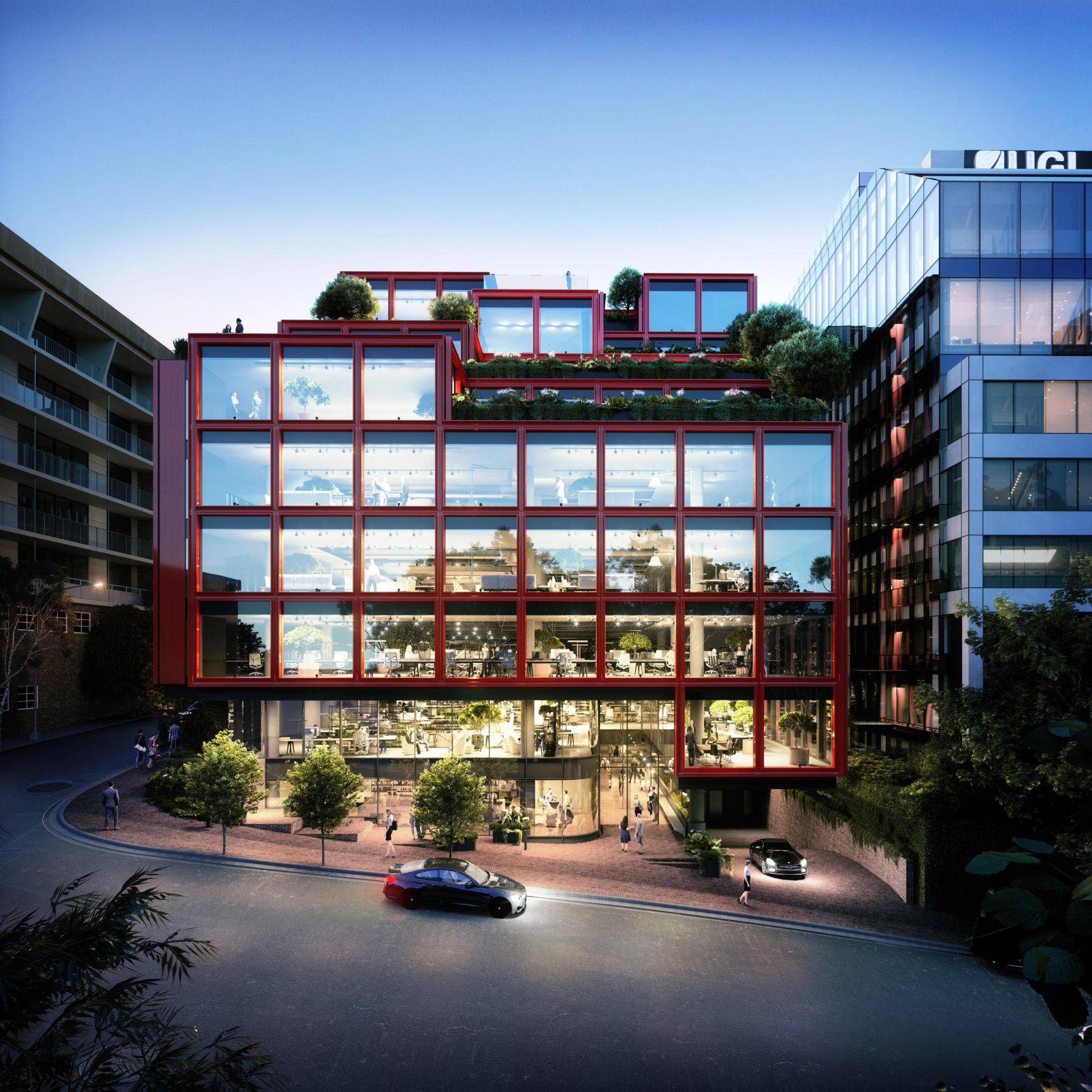 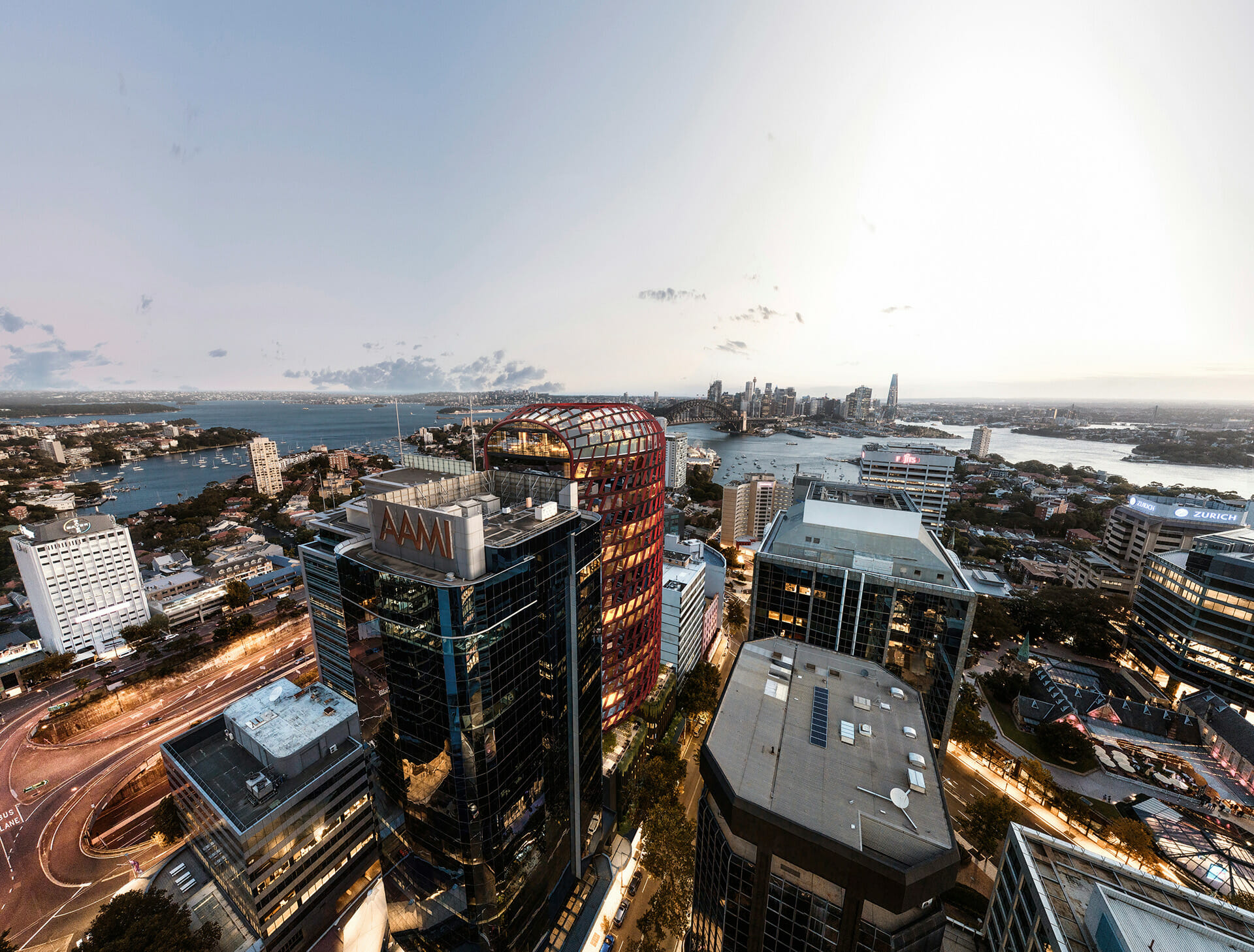 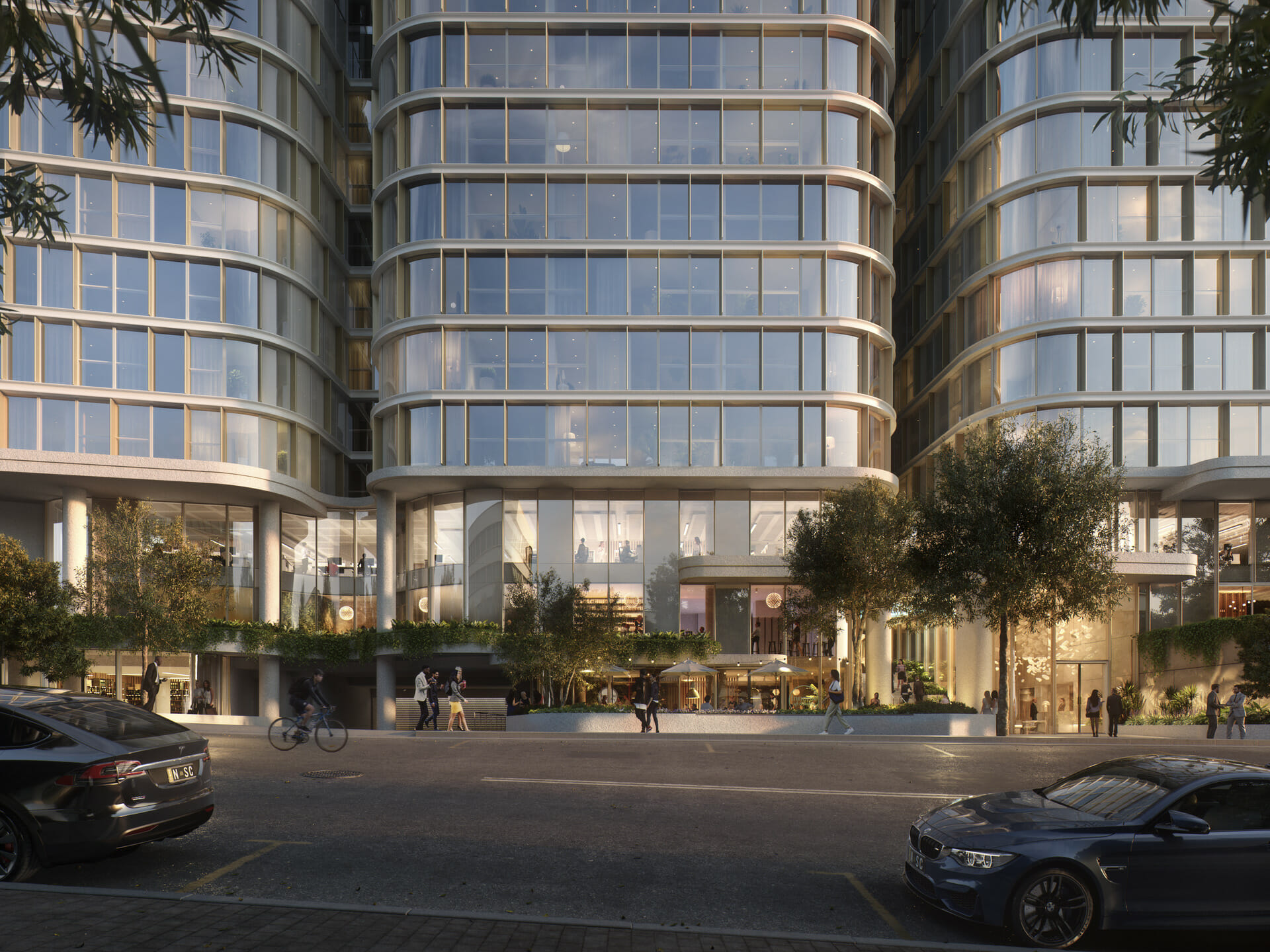 168 Walker
Blue & William A mid-scale workplace building that combines a unique user experience with contextual materiality and landscaped terraces celebrating views over Sydney’s iconic harbour. Blue & William
Warada on Walker 63-83 Walker Street aspires to be a major contributor to the evolving vibrant and highly connected city of Sydney, creating a new benchmark commercial offering within the North Sydney CBD. Warada on Walker
168 Walker Responding to the curvilinear shoreline of Sydney Harbour, the sculpturally carved and tapered form echoes the striated texture of the foreshore sandstone. 168 Walker

Jason Fraser is a Principal and Residential sector leader based in the Sydney Studio and also extensive experience in commercial, mixed-use and urban design projects.

Jason’s strength is in translating complex requirements into efficient and elegant solutions. His design process has the highest regard for collaboration with the client and team. As a result, he can weave together multiple aspects of a project – from over-arching social and commercial imperatives to simple details and overall form. 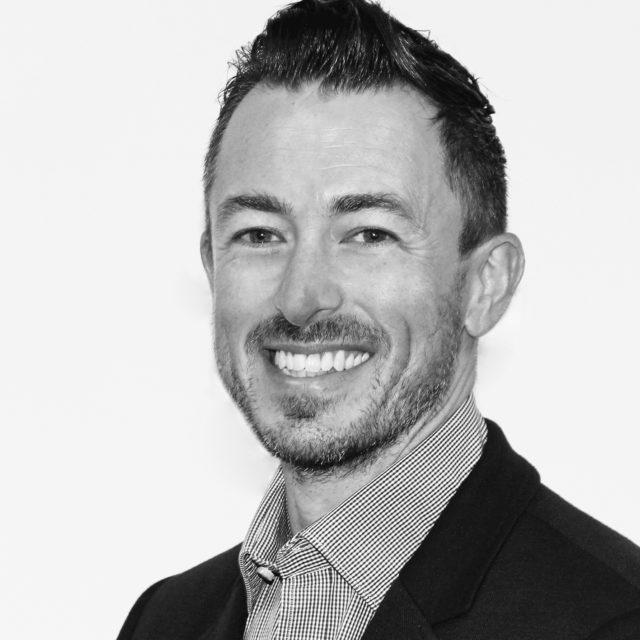 Get in touch
Related 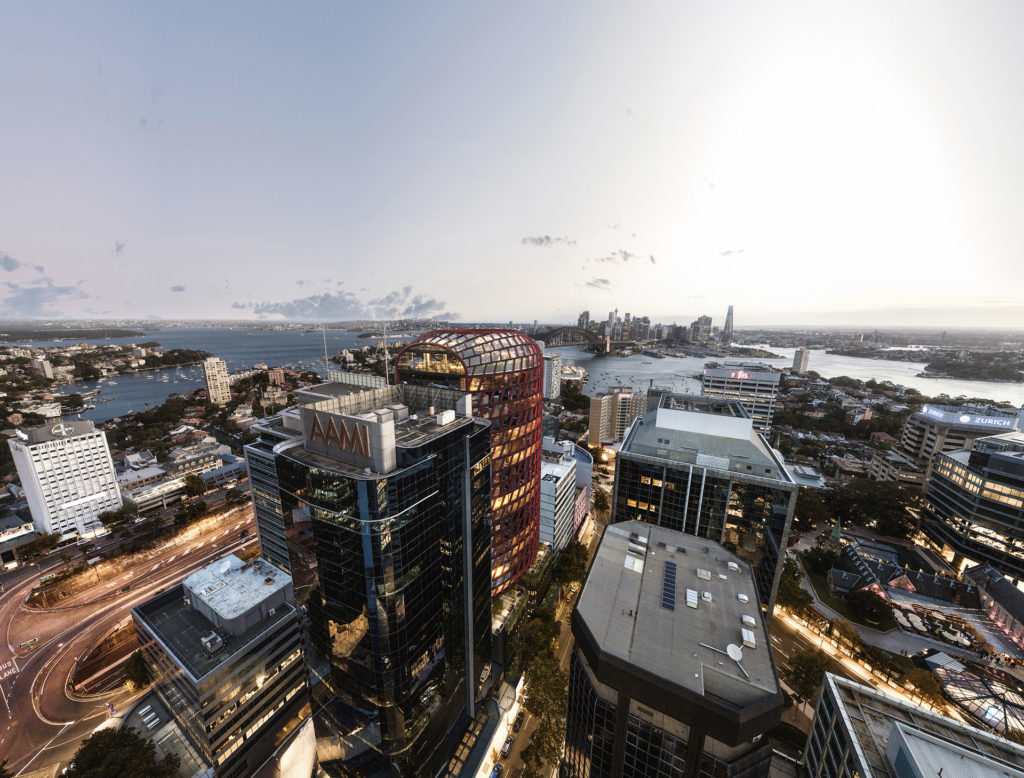 Woods Bagot shaping North Sydney one building at a time 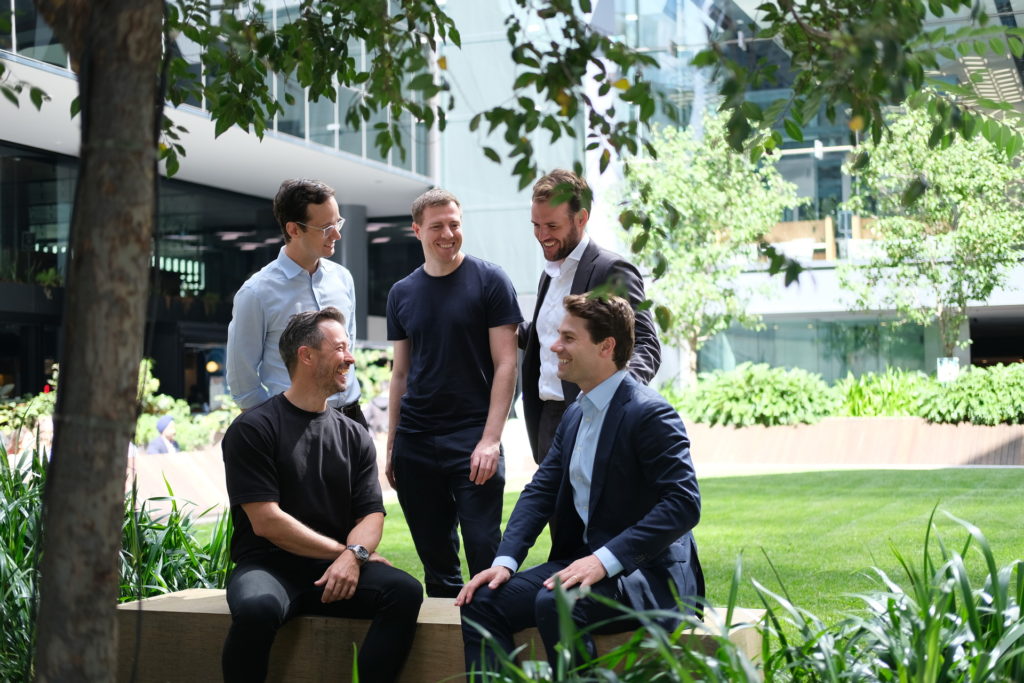 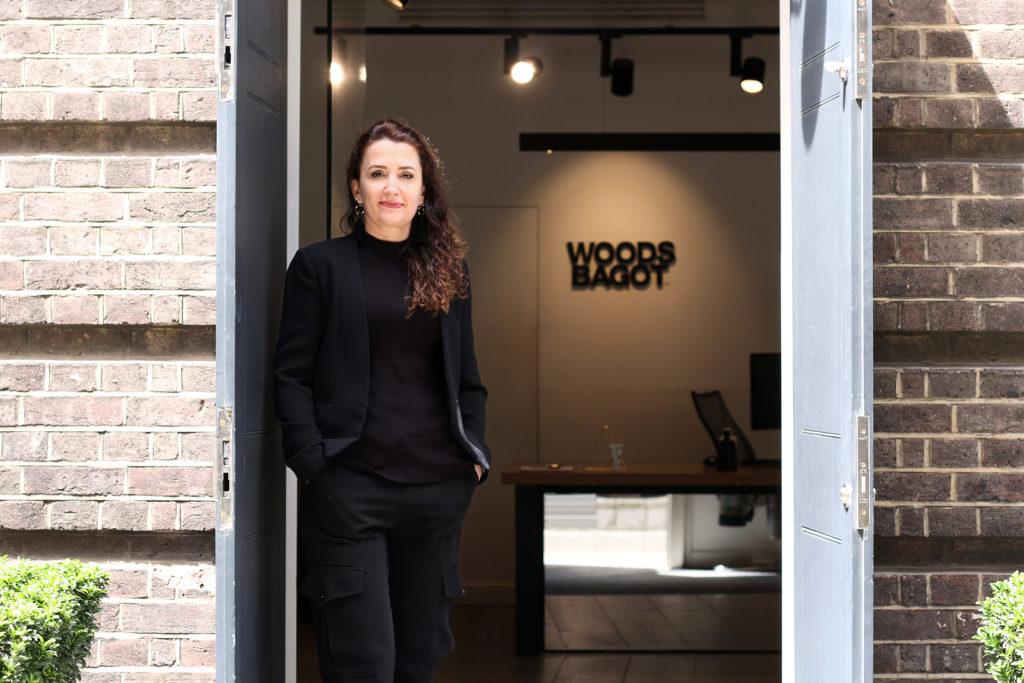 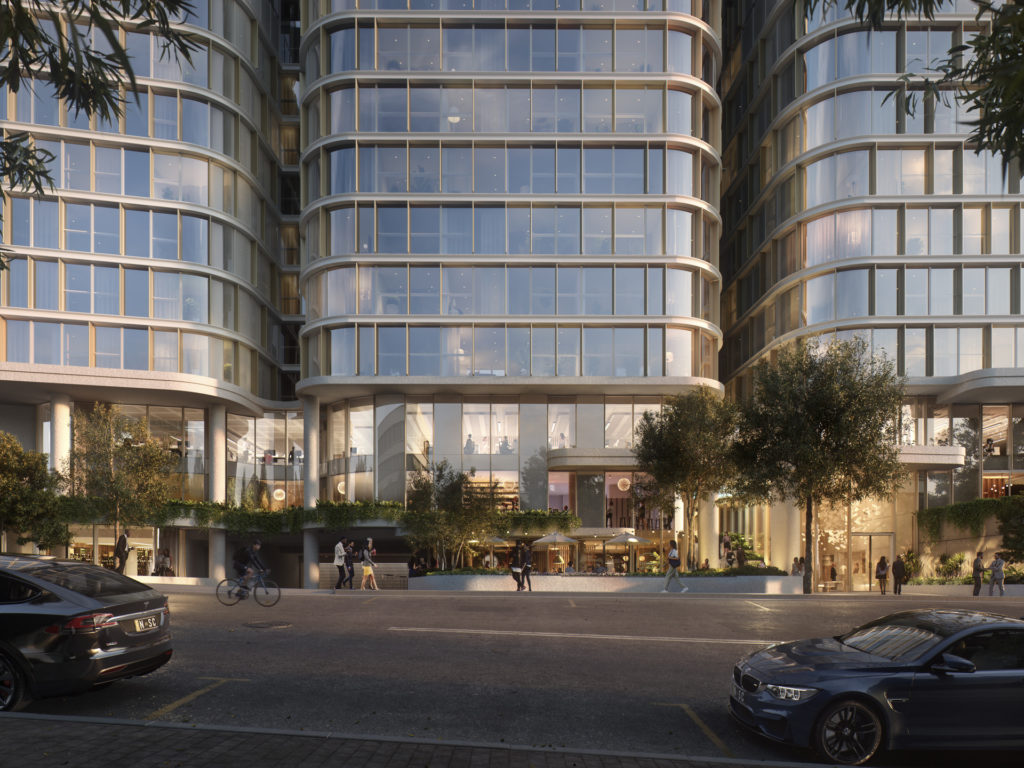